My book, Ranger Nader & The Sunstruck Phantom is a revenge book. It was inspired by two other stories.

The first is my Grandpa Karem’s family history. As per Gramps, his family came from a tiny town located on the tip top of a very high mountain in Lebanon. That town, Becharre, has been there for 1000s for years and historically existed for one reason – to take care of the groves of cedar trees on the mountain.  The Karems and the other residents of the town, were the Keepers of the Cedars.

The second story that inspired my revenge book is also a 2000-year old tale that stems from even more ancient times – The Epic of Gilgamesh. In The Epic, Gilgamesh is a Sumerian king who lived about 4000 years ago. He was the son of a goddess and as a demi-god had super powers. In The Epic, Gilgamesh goes on several heroic quests to prove to himself and the world just how  great and wonderful he was.

The Epic of Gilgamesh is supposed to be the oldest narrative story and is assigned reading in most school districts usually in the 6th and/or 11th grades.

I read it in the 11th grade and was floored, shocked and outraged.

On one of his “heroic” quests, Gilgamesh goes to the Cedar Forest in Lebanon and kills the Keeper of the Cedars, then chops down all the trees.  To me, Gilgamesh is not a hero.  In an attempt to be famous, he may have murdered one of my ancestors. Worse, he  is the original, senseless clear-cutter, and according to my family history, he may have caused a great flood.

So, as stated, Ranger Nader & The Sunstruck Phantom is a revenge book. In it, Ranger is his generation’s Keeper of the Cedars.  He takes on Gilgamesh, and… – spoiler alert- this time the good guys win.

Ranger Nader & The Sunstruck Phantom is appropriate for anyone over the age of 12. If you are an 11th grade of 6th grade teacher, you might consider assigning it along with The Epic of Gilgamesh.  If you like history, mythology, fantasy, science fiction, magic, secret schools, and spaceships, try it! I think you’ll like it. 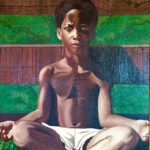 Poolside Siddhartha celebrates the wisdom and nobility of children 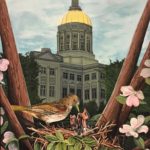 Painting of Georgia Capital with Thrasher by TK Read 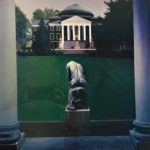 Think Twice is a painting of The University of Louisville’s cast of Rodin’s famous statue, The Thinker. 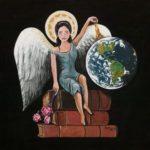 The Guardian of Knowledge 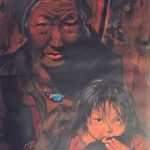 It’s Been a Hot Minute, But I’ve Got Some Exciting News!

March 1, 2023, Squeeeeee! COVER REVEAL! The second book in Ranger Nader’s The Guardian Series will drop its cover and we’re super excited–it’s going to be gorgeous! April 22, 2023, T.K. will have a booth Read more…

If you like the smell of green things growing, the shade of a mature tree or the taste of home-grown vegetables, then this is your time of the year! Earth day and The National Arbor Read more…

https://drjreads.blogspot.com/2020/06/an-interview-with-author-kam-karem.html I was super luck to have educator Dr. J. interview me for his blog, Dr. J Reads! You can read the interview by clicking the link above. Dr. J. is a maybe a bigger Read more…